Have you ever been at a loss for words when trying to explain something that felt truly indescribable?

All around us, every day, is the evidence of people's selfishness. The news, the stores, the streets, the AIR, is rife with hostility and malice and self-righteous anger and judgement.

But that's not what I'm talking about.

I'm talking about moments of greatness, that steal your breath, that make your eyes well with tears, that solidify themselves in your memory for all of time.

The upheaval and isolation and division...it has been before, and it undoubtedly will be again. Nothing is new under the sun, after all. We just have a different name for the same ugliness.

But...over the past 7 months, all of that has been set aside. Because greatness must be paid attention to.

The second season of the Triad Cougars basketball team has come to an end.

And before you think I'm going to say it was special because we won every game or set some record or played better than anyone has ever played before...I'm not.

I will say that there were some amazing dunks, some breath-taking three-pointers, some perfect passing. But, fundamentally, they're just boys. They're just learning. They made mistakes. They won and they lost.

Still...within all of that, we saw so much more.

Young men stepping up to welcome new members into the brotherhood.

The stronger ones coming to the aid of their smaller comrades.

Boys, just beginning to become men, feeling the swell of anger...and choosing not to let it overcome them.

Players willing to step in between their teammate and an unkind opponent, and refuse to allow ugly words to be spoken.

A brother coming to the defense of his brother, no matter the consequences.

All of them running until their legs would barely hold them, and then, when it was asked of them, running some more.

There were technical fouls.

There was a broken nose.

Men of honor and courage, these boys. Willing to do the hard things for each other. Willing to push through pain, fight back mental fatigue, press forward to win the prize.

Not a trophy, though they did win a few.

No, the prize they earned was within them, and between them.

We have watched them pray for each other in church...and we have watched it on the sidelines of a ball game. Heads bowed, shoulders touching, hearts knit together forever, these Cougars have clawed their way through a tough season, and they have won a victory for us all.

A victory over the distractions of the chaos all around us.

For a couple hours a day, a few days a week, a few months a year, there was nothing we couldn't do if we fought hard enough for the person beside us. Because they were fighting for us too. We soared when that ball and those legs did. It was special. We will always remember.

Thank you, Cougars, for your hearts of gold-covered steel.

Thank you for fighting for us, for representing us.

We will do the same for you. 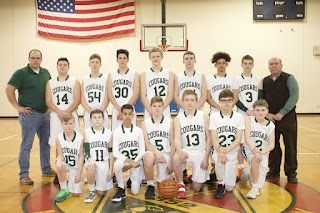 Posted by Charity Martin at 8:13 PM