So, Heath loves for me to try new recipes. I get several magazines in the mail that have recipes in them, and he will read through them and earmark pages for me to try. I will then dutifully read through the ingredients, put them on my shopping list, and add those dishes to the menu. (impressed?? just wait...)

The other day I got my "Every Day with Rachael Ray" magazine, and as usual, Heath looked through it for things that sounded good to him. This is how the conversation went that evening.

Heath: "There is a recipe in there for Peanut Butter Banana muffins. That sounds good right?"
Me: "Yes, that does sound good, and I have some overripe bananas I need to use. I'll take a look at it."

Two days later I was drinking my coffee at around 6 a.m. and decided I would make the muffins, since the bananas long since had more brown than yellow on their peel, and we were out of cereal and bread anyway. I grabbed the magazine, tore out the page with the recipe on it, and proceded to mix up the ingredients. One egg, 2 mashed bananas, 2 Tbsp. honey, 1/4 cup peanut butter, water, whole wheat flour, baking powder. As I was mixing I thought "Wow, these are healthy too. There is no sugar in them at all." Popped the 3 dozen muffins into the oven and and waited with pride to feed them to Heath.


...They weren't very good. They weren't sweet AT ALL, and they were pretty dense. I decided that it must be because they were super healthy muffins, and I wasn't going to tell anyone that I didn't really think they were great. So I made Heath a plate to take in the car, since he was running late to work, and put a bit of extra honey on his muffins to...try and help the taste a little. The boys got up and ate them without complaint, but I could tell Faith didn't really like them. I finally gave her something else, because after all, I didn't want to eat them either.

Later on in the day as I was deciding whether or not to even KEEP the leftover muffins, I started wondering if I had left out some ingredient and thats why they weren't good. After all, they sounded like they would be tasty. What was the problem?? So I pulled the magazine page from the cabinet where I store my recipe books, and for the first time I actually looked at the whole page, not just the ingredients list.


On the top of the page was a REALLY BIG picture of Rachael Ray's dog. There was a heading that said something like "Summer Treats your pet will love" and there was an additional picture of a big fluffy muffin in a doggy dinner bowl. 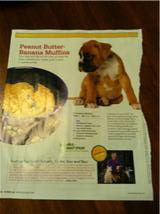 Yep, thats right, ladies and gentlemen, I served DOG TREATS to my entire family for breakfast...

Are you finished laughing yet? Because I have a defense...WHO IN THE HOLY CRAP DESIGNS RECIPES FOR THEIR DOGS??? It never in a million years occured to me that any recipe found in a RECIPE magazine would be for THE DOG. Secondly, it used all the same ingredients used in HUMAN treats, so I had no reason to question it, and I didn't even look at the whole page, I only saw the recipe. IT WAS EARLY and I hadn't finished my coffee yet!

Sigh...you're right. My excuses sound lame. I know it too. So, because I am able to admit when I do something stupid and really funny...I am giving you this chance to laugh with me...at me.
Posted by Charity Martin at 9:48 PM No comments: